Recommended Equipment for drop-trappers
The drop trap has no bottom, so it’s always necessary to transfer the cat(s) into a conventional box trap (or transfer carrier) for transport to the vet. This is not difficult or risky if you have the right equipment!! You’ll need at least one trap or carrier with a guillotine-style door (in addition to the trap door at the other end).
In a pinch, you can use a single-door trap (such as a Havahart), but because the Havahart’s door swings OUT, the traps won’t fit flush to each other - you will have a gap of about 3 inches between the drop trap and the Havahart, which needs to be blocked somehow so the cat doesn’t escape (another trap on either side, for example, and the cover arranged to conceal the gap). 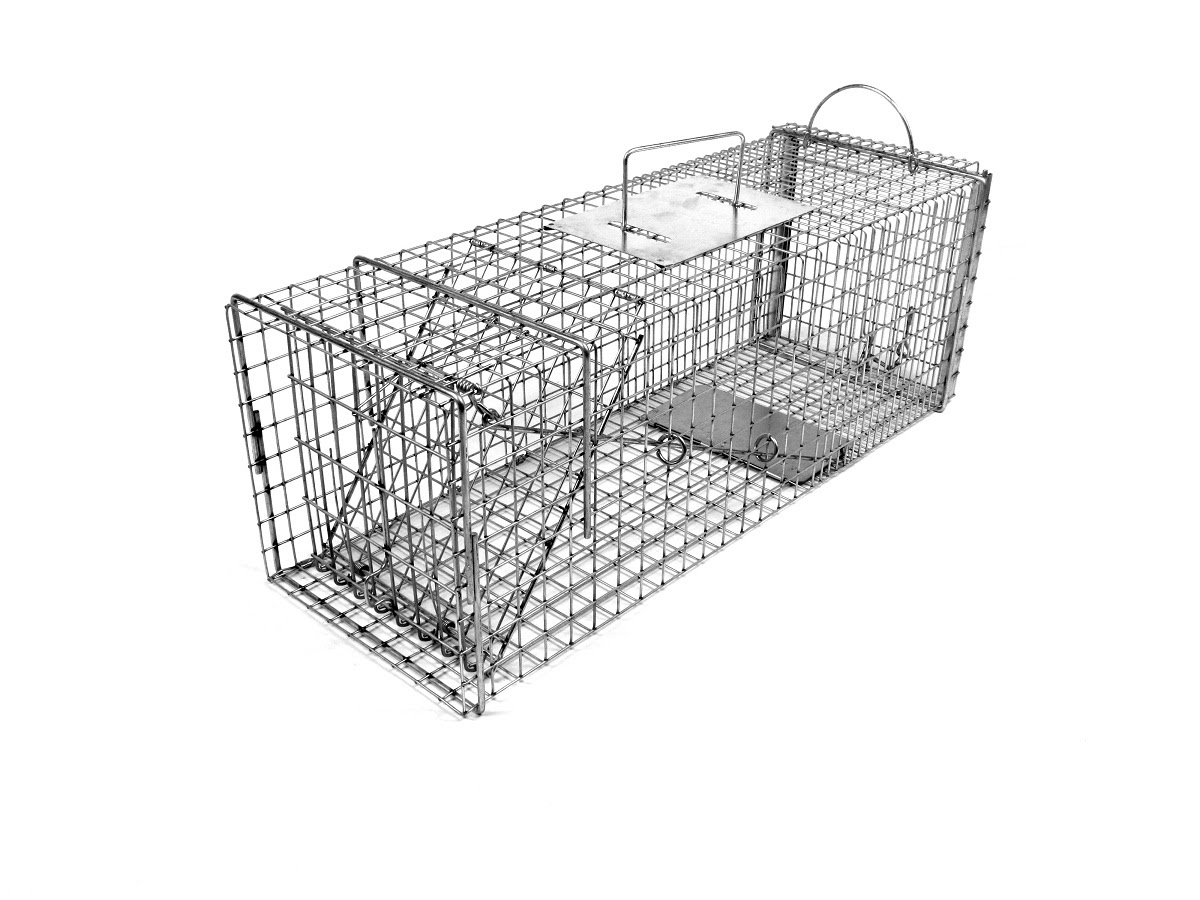 Tomahawk 606 – Tomahawk calls this 2-door trap a "Deluxe Transfer trap". It is beautifully made, 9x9x26, weighs only 8 pounds, resists rusting, is sensitive enough for kittens and large enough for MOST cats. Extremely useful as a trap (as well as for transport), I think that you catch more cats in a short trap like this, than in a large trap. If you feel that it’s too small for pre- and post-op holding, you can always transfer to a larger setup after capture. There are occasions when there’s just not enough level area for a drop trap – then these traps come in very handy.

the new Neighborhood Cats "TNR" version of the Tomahawk 608: for really BIG cats - it has a longer trip plate to lessen the possibility of the cat stepping delicately OVER the trip plate (you should be lining the bottom with newspaper, which lessens the likelihood of this), and it's great that they put the catch for the guillotine door on TOP of the trap (doh!).

Other traps with guillotine-style rear doors: Tru-Catch, Safeguard. Don’t come in the small cat-appropriate size of the Tomahawk, Tru-catch’s rust quickly, and Safeguards bend easily and then don’t work smoothly.
Not recommended: Hav-a-harts don’t have a trap with a rear door that opens flush, their rear door is poorly designed, traps are unreliable, noisy, have sharp edges and rust quickly!

Tru-catch makes a transfer carrier (T24TE, $67) that is highly recommended for its versatility: It has a guillotine-style door for transfer of cats or kittens from a drop trap. It is large enough to hold a pregnant or large cat comfortably, or several smaller cats, or a litter of kittens, overnight. If desired, you can hold a small cat overnight with a small litterbox. The top also opens, which is extremely useful when loading a pet cat (or a netted cat) that doesn’t want to be loaded!
Your vet may like the smaller version: they have to inject the cat through the wire mesh, which is difficult if the cat comes in in a very large trap, or in an airline-style carrier. They can transfer him/her into the small transfer carrier.
Available from ACES 800-338-2237 or http://www.animal-care.com/ and other online sources. Ask how long it will take to receive it.

Also from Tru-catch, the TD2 trap divider $14 (aka isolator, or “cage fork”). (Tomahawk carries one also but it’s lighter weight and gets bent out of shape.)
Useful to confine the cat to one end of the trap while you change the paper at the other end.  Use a COVER over the cat (not as pictured) to help the cat feel safe - if he's panicking he can probably get through a single trap divider.  You can use 2 dividers at 90 degrees to each other, for safety.

This makes a nice gift for your vet, if they don’t have one already. They need to squeeze the cat into one end of the trap in order to inject the anesthesia. 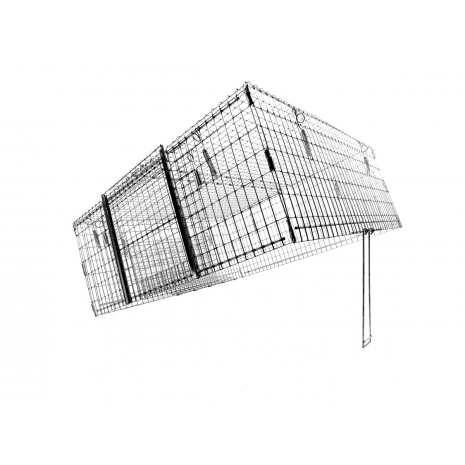 3.  Tomahawk Drop Trap  (DT1)  this is the original, 3-foot-square version.  It's not recommended for kittens - probably because it could injure or kill one, if it came down on one.   I don't recommend the larger size, due to its greater weight, and the larger area means more running room, more scope for injury from running into the trap.