You may NOT need a drop trap to catch a cat who is simply wary of the standard wire traps.  Many cats, possibly 50%, just need a little more time to get comfortable with a wire trap.  Perhaps they've been trapped before, or they've just been around the barn a few times - we call them trap-wise, or trap-shy.  In a few days, you can train most trap-shy cats to eat out of a wire trap, using this common-sense technique.
This is also a great technique for trapping in areas too confined or uneven for the drop trap. Thanks to the good folks at Neighborhood Cats (NY) for this idea!

STEP 1: Training cats to use a box trap as a feeding station
Although this technique is ideal for backyard cats, it's possible although more difficult when the cats eat in a very public spot. The more time they have to spend with the trap, look it over, live with it, the better. If possible, disable the trap so that evil-doers cannot use your trap for mischief - I generally use traps with a removable door, and remove the door until I'm ready to trap. 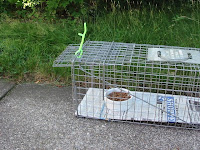 1. In the place where the cats normally feed or hang out, tie the trap door open (with a piece of string, a twist-tie, a pipe-cleaner). Line the floor of the trap with cardboard.
Ideally, you should leave the trap in one place, 24/7 - chain it to something if you need to - and leave the only food available in it. You want ALL the cats to eat from the trap.  Don't give them the option of NOT eating from the trap.

2. Start off with the food bowl placed in the opening (not at the back). If one or more of the cats eat from the bowl in that position, move it further into the trap at the next feeding. If they DON'T touch the food in that position (in 12 hours, say) AND they seem suspicious of the trap, you may need to start with the bowl outside, but NEAR the trap.
One or more of the cats will get up the nerve to try it out. That cat will demonstrate to the others that it's safe. Once they're comfortable with eating from the bowl, at the next feeding, place it closer to the back of the trap. You don't need to wait until ALL are eating before moving it. Once they're eating from the very back of the trap, you're ready to make your vet appointment, and set the trap, for real!

STEP 2: Controlling the box trap to catch the cat you want
If there's only one cat to trap, you're all done!  In many cases, though, you want to pick out a particular cat to trap first, such as a female, or several of the cats might already be done and you'll want to avoid trapping (and scaring) these decoy cats. You can control the trap and pick out the cat you want - while still allowing the other cats to eat happily and without alarming them (the better to catch them later!). You can catch a mom with her kittens if they all eat together (use a large-ish trap and a plate or cake pan, above). In order to do this, you want to control the boxtrap's door. 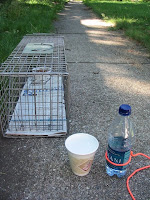 1) Find a soda bottle or stick that's the right height to prop open the trap door. Get some cord - you'll want 30-50 feet, NOT "mason's line" which will stretch too much.
Untie the door and prop the door open with the bottle. You may need to put a weight on the trap if the door spring is very strong, or the trap is very light. Put the bottle to one side of the opening, braced against the trap, taking up as little of the opening as you can. You'll have a bigger, less slippery surface to work with if you put a paper/styrofoam coffee cup over the bottle.
2) Tie a string around the waist of the bottle
3) Put a bowl of food at the back of the box trap, and taking string in hand, back off as far as you need to so that the cats no longer take notice of you. You may be able to sit in your house or car, with a view of the trap. Ideally, you should be in a position where you're looking at the side of the trap, and somewhat to the rear of it. In this position, a cat eating from the trap will not be "tipped off" by seeing you move to yank the cord. Take up any slack in the cord, now. 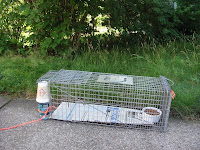 4) wait for your target cat to eat. Other cats may eat first, and you can catch them later. If you have a very wary cat, don't do anything to scare her, like trapping a male cat that just happened to go in the trap first - you'll get him later! You don't have to wait until she gets all the way to the back, but don't jump the gun, or she'll be able to back out. You want her rear end to be 6 or 8 inches inside the trap, and let her settle, and then YANK the cord.
Remember - you must WAIT for her to get far enough in the trap and settle down. If she backs out because she's still nervous, she'll keep coming back because she's hungry - and you'll get a better opportunity, but if you scare her by tripping the trap too soon and she gets away, it may take her a while to try it again.


This technique, as well as others, for trapping the hard-to-trap:
http://www.neighborhoodcats.org/info/hardtocatch.htm


Linda, in WI:
I wanted to tell you how beautifully this alternate trapping method worked for us. We left two traps out all week, tied open as your website suggested. Once we were ready to trap the mother cat and her kittens, we were successful almost immediately -- 4 cats in two days.

Kathy K:
We implemented “The Trick” and were able to nab our 3 hard to catch kitties. It worked like a charm. To date, we have caught 16 cats which have all been neutered and spayed. ... One of the females had a painful cyst on her ovary which was removed. The last guy caught, had an open wound which never seemed to heal. He is being treated for that. Before “The Trick”, he had triggered the trap and had backed out, so 'The Trick" was key in being able to catch him.

Marie in FL:
It worked!!!! I am off to the vet with the last of the parking lot gang!

Debbie, in VA:
With the help of an empty Welch’s grape juice plastic container, some string tied around it, and a Havahart trap, I finally trapped the very skittish cat. Now he’s healing downstairs in a Midwest Cat Playpen after getting neutered and vetted.


thanks to "the Trick", it took less than a week to catch Titibird the supersmart feral who hated our SPCA trap, yaay!! she's been desexed and is back with us!